Germany has so very much to offer lesbian and gay travelers.

I’ve always found the locals to be open and friendly, tolerant and accepting of alternative lifestyles and they really know how to throw a damn good party. Add to that the fact that most people in all the major cities speak English and it’s easy to see why it makes the perfect destination for a relaxed and fun break.

As well as this guide to Cologne, you can also find out much more about what’s happening in LGBT Germany on the Germany for LGBT microsite

Cologne is Germany’s fourth-largest city (after Berlin, Hamburg and Munich), and is the largest city both in the German Federal State of North Rhine-Westphalia and within the Rhine-Ruhr Metropolitan Area, which is a major European metropolitan region with over ten million inhabitants.

Located on both sides of the Rhine River, the city is dominated by the imposing Cologne Cathedral – known as ‘the Dom’ – the city’s most famous landmark. Cologne locals are particularly known for being easy-going and approachable and openly embrace the Southern European lifestyle when it comes to living their lives. The moment the sun comes out so too do the tables on the squares where sitting and sipping a spritz is the perfect way to bridge the gap between late afternoon and evening. Having visited Cologne on many occasions I’ve always found it to be the German city that’s most at ease with itself, with locals who are an affluent and confident bunch but don’t like to make a fuss about it.

The city is a major cultural centre of the Rhineland and has a vibrant arts scene with over thirty museums and hundreds of galleries. Exhibitions range from local ancient Roman archeological sites to contemporary graphics and sculpture. The Cologne Trade Fair hosts a number of trade shows such as Art Cologne, Gamescom and the Photokina and many media companies have located their offices here.

The city is perfect for exploring in a long weekend and the best months to visit would be during the European Spring, Summer and Autumn between April and October. Cologne airport is one of those incredibly efficient smaller European airports that’s a real joy to use and is located just a short taxi drive from the city centre.

Having such excellent links by road, rail and air make Cologne a popular place for gay travelers from all over Europe, who think nothing of jumping in their cars and heading to the city for a weekend of fun.

So just what does the city offer the gay visitor? Well firstly it’s definitely an ‘all things for all people’ type of city that will appeal to older bears, younger guys and lesbians of all ages. The fetish scene is also very evident here (as it is in most of Germany).

Although you’ll have a great weekend in Cologne at any time, visiting the city during one of the party weekends is pretty much guaranteed to be a winner. Boys and girls from all over Europe flock to the city for CSD (Christopher Street Day) which is Gay Pride, in July, Leather Pride Week at the beginning of June and Bear Pride weekend in November.

The city is divided into two very distinct gay areas. The bears and the leather crowd should head to the area around the Heumarkt where some of the most traditional bars and cafes can be found. Another section of bars, cafes and restaurants – known locally as ‘The Bermuda Triangle’ – is located around the Rudolfplatz area which has sprung up in the last twenty years or so and these are generally more modern in style.

Below are our top things to do and places to go which, although not all gay, make for an enjoyable break in the city.

Finally, don’t worry about having to book a gay run hotel or guest house. All hotels in the city are incredibly accepting of gay travelers and realize that many of the larger events that are aimed at LGBT travelers throughout the year make up a large part of their business. For something really special check out the Hyatt. It’s located on the banks of the Rhine just a short walk into town over the bridge.

TOP TIPS 1. Take an open top bus (if it’s Summer) around the city. They start near the Dom and are the best way of seeing the city and getting to know what’s where.

2. After your bus tour stop for amazing coffee, cakes or ice cream at Café Reichard. This beautiful café sits in arguably the best spot in the whole of Cologne under the shadow of the Dom and has been serving excellent coffee, cake and ice cream as well as traditional German specialities since 1855. 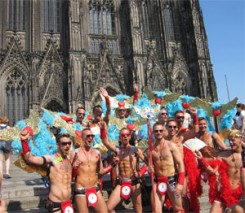 3. Saunas don’t get much better than Bathhouse Babylon Cologne. Formally known as Badehaus Cologne this stylish sauna is now under new management and has multiple cruising areas, saunas, whirlpools and an outdoor decked area which is perfect for relaxing after clubbing on a Sunday morning. There’s even a bar and restaurant serving healthy food. Indulge!

4. Head over to Kettengasse where you’ll find a selection of trendy gay shops and cafes. Morganstern Café is great for people-watching as is Café Rico which is just around the corner on the trendy Mittle Strasse.

5. No trip to Cologne would be complete without a visit to Germany’s gay store. Selling everything you could want (and a lot of stuff you’ll end up buying but probably didn’t know you’d want!) The place to stock up on all those coffee table books filled with sexy guys as well as the largest supplier of gay magazines, toys, condoms, lube plus sexy clothing.

6. One of the most popular places to eat is 4 Cani located on the top end of Kettengasse. This popular Italian restaurant has one of the best positions in Cologne right in the heart of the gay village and although not gay-run is very popular with the local community, especially during Summer when it’s almost impossible to get a table on the extensive pavement café on a Saturday lunchtime. Bookings advisable!

7. For a night out to remember no where does it quite like Greenkom. This legendary after- hours nightclub attracts clubbers from France, Belgium, the Netherlands and all over Germany to its once monthly parties. If you like it hot and sexy (and we’re not just talking music here) then Greenkom is your kind of place.

8. When it comes to retail therapy you’ll find Cologne is a joy to shop in. The most popular shopping streets are Schildergasse and Hohe Straße. Those who like trendy boutiques should make a detour to nearby Ehrenstraße. For luxury and glamour then you should head to Mittelstraße. There’s also a wealth of shopping opportunities in the arcades in the city centre and along the Ring. Here you can shop till you drop in an ultramodern atmosphere — and fortify yourself afterward with exquisite local delicacies in one of the many lively coffee bars. Less well-known, but therefore all the cosier, is a shopping tour through the high streets of the individual neighbourhoods (called “Veedel” in the local dialect). Get the retail lowdown – and get your credit cards ready – with information at:

Which brings us to the city’s name.

This is where Eau de Cologne or in German: Kölnisch Wasser (meaning Water of Cologne), was created by an Italian expatriate Johann Maria Farina at the beginning of the 18th century. The Farina family are still creating cologne in the city but the most famous brand which is exported worldwide has to be 4711. A trip to its beautiful store is well worth a visit and makes great gifts for friends.

This blog is powered by OutNow.travel

This site uses Akismet to reduce spam. Learn how your comment data is processed.