I’m sipping a piña colada, looking out over sparkling blue seas while a hot girl in a skimpy bikini fans me with a palm leaf.

Ok, ok. I made that last bit up – but seriously, guess where I am. Barbados? No. The Bahamas? No. Believe it or not I’m actually sunning myself in Büsum, a tranquil little seaside resort on Germany’s North Sea coast.

I’ll leave it to you to insert the inevitably smutty puns about me getting a good feel of Büsum, as frankly I don’t have time for such easy innuendo!

What I do have time for though is Germany’s surprisingly idyllic beaches. See, it’s not all about Büsum where hikes, watersports, spas and shopping are the order of the day.

Sylt – Germany’s northern-most point is a lovely island in the North Sea. Its sandy beaches are divine, especially if stripping off’s your thing.

The island is famous for its nudist beaches, more poetically known as FKK areas, which translates as ‘free body culture’. This is as gay as it gets and although the ‘free body’ beaches are no Fire Island there’s a great sense of open-mindedness from all.

When you’ve had enough ogling (the views, of course) take a trip inland to one of Sylt’s fabulous restaurants, like Jörg Müller, which brings a dash of elegance to seaside life with fancy Swiss/ German fare and gorgeous surroundings. 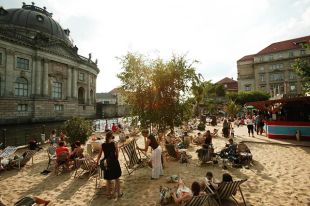 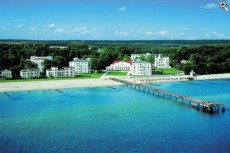 Next stop on my beach-hopping tour of Germany is Helgoland, a Frisian island off the northwest coast. It started off belonging to Denmark, then Britain got its hands on it, before it was finally ceded to Germany in 1890 – and if you ask me, anywhere this coveted must be good.

As well as a rich and fascinating history, this quirky island is a tax haven, so shopping is a must!
Heligendamm is Germany’s oldest seaside resort and is known for its beautiful white classical villas – kinda Key West meets The Hamptons. And who knew? In 2007 home to the G8 summit! But don’t let the fact George Bush dipped his toes in the water here put you off, it’s a super sophisticated spot for sojourn by the sea.

The northeastern island of Usedom, on the boarder with Poland, has spanking white sand that could rival the Caribbean. There are a host of gay-friendly hotels dotted around Usedom and some fab spas. Over in Kühlungsborn, a gorgeous seaside resort town on the Ostsee, 19th century architecture (there are no hideous high rise hotels here) and nearby pine forests make for a chilled-out beach break.

There are so many hidden gems of beaches in Germany, this quick round-up far from covers all the options. But I’ve got to say – my favourite of all the country’s seaside spots has got to be Berlin’s Urban Beach.

For a start it’s where you’ll find all the cutest gay guys and gals showing off their trendy swimwear. Strandmarkt is one of 30 beaches that have sprung up in Berlin It’s a crazy country-and-western style beach, bar and play area.

Also worth taking a bucket and spade to is Strandbar Mitte, the first modern urban beach to open in the centre of Berlin. Its super well-organised, clean and slam bang in the heart of the city’s gayest and most fashionable area.

Right, that’s about all I’ve got time for this month sun-lovers. So pour me another piña and bring back the girl with the palm because Ich bin ein beach-goer and I’ve got me some German rays to catch.

This blog was powered by www.OutNow.travel

One response to “Germany – hit the beach”

This site uses Akismet to reduce spam. Learn how your comment data is processed.